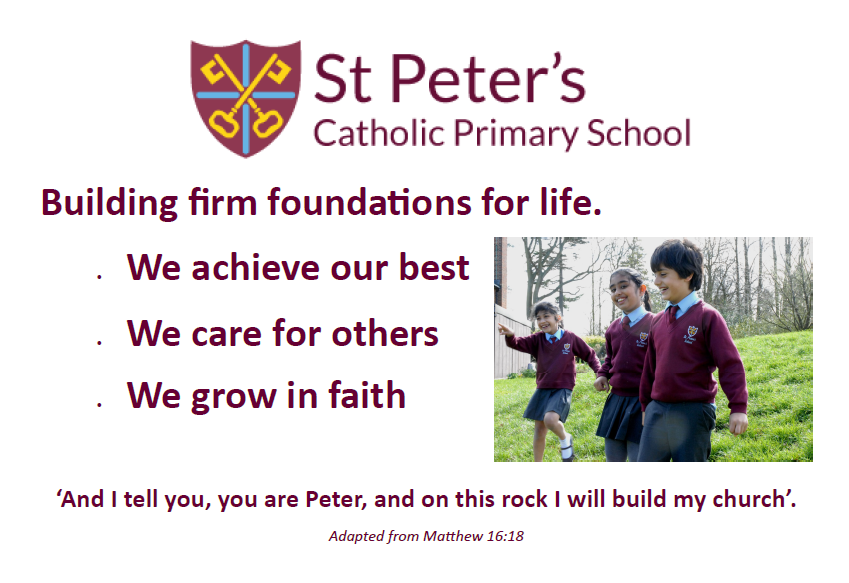 St Peter’s is an 'Outstanding' Catholic school where academic excellence is valued within a highly inclusive ethos.  We offer a broad education which fosters our pupils' spiritual, personal and social development, preparing them for life in 21st century Britain.

We are committed to safeguarding and promoting the welfare of children and young people and we expect all staff and volunteers to share this commitment.

Our School began as a small building next to the Church of Our Lady and St.Peter in Leatherhead, and was first opened on 5th September 1947 with twenty children on the roll.

It was started by the Parish Priest of Leatherhead at the time, Fr. Bernard Smoker, who wanted to set up a non-fee paying school for the Catholic children in the area.

In 1953 Sister Curtis, from the order of The Religious of St. Andrew, became the headmistress and remained so for 21 years.

In 1958 seven classes moved to the present site and in 1975 four extra classrooms were added. This coincided with the raising of the school-leaving age to 16 and the school became a First and Middle school.

In 1993, with the reorganisation of the age of transfer, St. Peter’s became a Primary School.

This video, made by Finlay and Thomas in Year 5, explains a bit more about what makes St Peter's special...