Meet Winnie. Winnie is a black
Labradoodle (a cross between a
Labrador and a Poodle).

She is in training to be an Educational Assistance Dog. That’s a dog who lives with a teacher but comes to school every day to work with children and be part of the
school family. Educational Assistance dogs to help teach children non violence , empathy, respect, kindness, love,
responsibility friendship and trust. Winnie will live with Miss Bartle who is the adult responsible for her.

You can find out more about how Winnie is doing in the 'Winnie's Weekly Wag' section of our newsletter or in the picture books below. 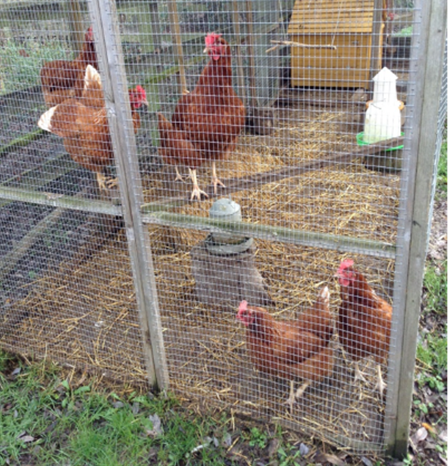 Meet Sunshine, Rainbow, Flower, Sparkles, Pecky and Fluffy who are our chickens. They all hatched here at St Peter's and are all female chickens, called hens.

Chickens are omnivores which means that they will eat anything;  grass, bugs, fruit, vegetables and and other plants.

Robbie and Freddie are our school guinea pigs. They are both male guinea pigs (called boars). Guinea pigs are herbivores, which means that they only eat plants.

During the school lockdown, Robbie and Freddie have been staying with Mrs Hall.

Meet Floppy and Poppy, our school rabbits. They are both female rabbits (called does). Rabbits are also herbivores, which means that they only eat plants.

During the school lockdown, Poppy and Floppy have been staying with Mrs McDonnell.

Some interesting facts about rabbits: