The Story of St Peter

Who Was Saint Peter? 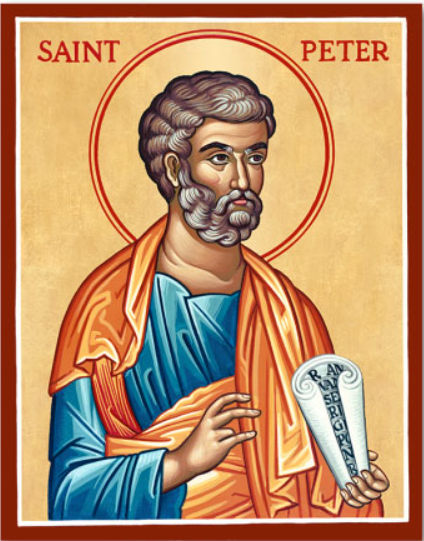 Peter was a fisherman who lived near the Sea of Galilee. Being a fisherman was a lot of hard work because they used big nets to pull in fish from the sea. Peter lived a very long time ago. In fact, he lived in the very first century CE - about 2000 years ago!

How do we know about Peter? First, he was written about in all four gospel books of the Bible. Often a historical account of someone or something might only have one source, but in this example, we have at least four! That would be the writings of Matthew, Mark, Luke, and John.

What Was He Known For?

Peter was among the first disciples of Jesus. All four gospels tell a similar story of when Jesus saw Peter and his brother Andrew fishing and He told them to, ''Follow Me, and I will make you fishers of men.'' That was the beginning of a whole different life for Peter! For one thing, Jesus gave him the new name: 'Peter', which means 'rock'. The name his parents gave him was actually Simon, so he was sometimes called Simon Peter.

As a disciple, he is remembered for some major events. One of the big ones according to the Bible is that Peter out of all the disciples correctly identified who Jesus was. When Jesus asked, ''Who do you say I am?'', He was pleased when Peter responded, ''You are the Christ, the Son of the living God.''

Remember how Peter got a new name meaning rock? He is also known as the foundation of the Christian church. A foundation is the solid part of a building that holds it up from the ground. Back then a foundation would have been made of rocks, just like Peter's name!

Saint Peter was the first leader of the early apostolic community (the word 'Pope' wasn't used at that time). We now call Saint Peter the first Pope and all other Popes follow in his footsteps.

St Peter's Basilica, in Vatican City is dedicated to him. Inside, there is a bronze statue of Peter and the pope’s altar stands above the place where Peter is believed to have been buried.

His Feast Day is on 29th June and is always a day of great celebration in our school.